Generally, we think of witches as old hags, widows who lived on the outskirts of their community, often bad mannered and physically offensive. Some were known for healing powers, such as an herbalist or midwife, or one who brewed noxious remedies to inflict pain and suffering on others.

Yes, there were widows accused as witches in 1692, but so were young mothers and little girls. Men and boys were not exempt either. It’s difficult to create a profile of a witch because the accused ran the gamut from beggar to rich merchant, law-breaker to minister—and everything in between.

In the 17th century, many people believed in witches and witchcraft. Their ancestors lived through witch-hunts in the old country, where thousands of witches were burned at the stake. They learned from church sermons that the Devil was using witches to undermine the Puritan church. And they heard rumors of witches wreaking havoc in .

Accusations went flying. The accused lived in (now ), Salem Town, throughout county, and even in . Some were very well known in the neighborhood, others weren’t known or even recognized by their accusers.

Since not all the Salem court documents still exist, it’s difficult to even account for how many people were accused; about 150 were imprisoned, 19 hanged, one crushed to death, and at least five died in prison.

To learn more, check out the Salem Witch Trials: Documentary Archive and Transcription Project () or the Famous American Trials: Salem Witchcraft Trials 1692 (by the University of Missouri-Kansas City School of Law). Both sites include 17th-century court records and historic maps. 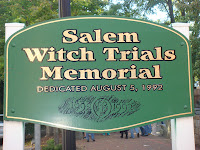 For centuries, , has been trying to forget the 1692 witch hunts. All the old buildings associated with the victims of the witch-hunt have been torn down—the court rooms, the meeting-house, the jail. Only the so-called Witch House remains, though its only claim to the title is that Judge Jonathan Corwin (1640-1718) lived there while he served on the Court of Oyer and Terminer in 1692.

Even the men and women who were hanged have no final resting place so marked. Condemned as witches, they were buried near the place of their hanging. Most of their families, however, snuck the dead bodies from the rocks in which they were tossed and gave them a final resting place—in an unmarked grave.

Torn down, disintegrated, obliterated. It wasn’t until the mid 1950s, when Arthur Miller’s The Crucible redefined all that “witch-hunt” could encompass, that the city’s outlook started to change. By 1970, was endorsed by new age witches as well as TV witches. People started looking for history, and remade it, in its many "museums" and storefronts.

Today, you can walk along Essex Street or and encounter witches by the dozens. You’ll hear mutterings of Bridget Bishop in the streets. You can touch the beam from the original jail—one of the few artifacts that survived—at the Witch Dungeon Museum. You can see vignettes of 1692 events at the Wax Museum of Witches & Seafarers, the Witch History Museum, or the Salem Witch Museum.

What rises above the din of tourist attractions, though, are the voices of the dead. Despite the destruction of many witch trial documents, the ones that exist are so poignant, so telling. Luckily, the words are kept alive in , in the many portrayals of these innocent victims of the 1692 witch hunt.

And that's why I find myself in Salem almost every October on a pilgrimage to the past.

Keeping the witch trials in perspective

Last year on a trolley tour of , the conductor plied us with stories as we traveled the old streets, from Roger Conant founding the city in 1626 to the great age of ships. It’s a fascinating place with great houses, literary figures, and maritime history. But flocks of tourists really visit for its connection with the 1692 witch trials. That’s why they’re on the trolley in the first place, to go from the and the to the Witch Trials Memorial and everything in between.

Yet our conductor, who claimed descent from several hanged witches, wanted to downplay the prevalent theme of the . He wanted to put history in perspective and so he reminded us tourists that, after all, the witch hysteria only lasted for six months. Six months? Sure, if you’re counting first arrest to last hanging—but not including final trials and prisoner releases. It took years for the witch hysteria to build to a crescendo and the after-effects had long-lasting results.

In the last 300 years, we still haven’t figured out why 20 innocent people were killed. Whatever it was—the devil, oppression of women, fermented rye seed, Indian war fears, interpersonal relationships, struggles over land acquisition, political stress, bad weather, poor crops, or God’s punishment—that brought Salem and the other villages to that bubbling pot of toil and trouble, did not end abruptly after Governor Phips dissolved the Court of Oyer and Terminer.

Even after the trials were over, accused witches rotted in jail cells, waiting for their families to pay their bills. Lydia Dustin, in fact, died in the spring of 1693 while awaiting money for her release. The effects of confinement, meager food, poor sanitation, and infection, drove some, such as Mary English, to an early death. Others—such as the youngest victim, Dorothy Good—were never capable of taking care of themselves again.

Some, such as Anne Putnam Jr. and Judge Samuel Sewall, were weighted down with guilt for their part in sending innocent people to their deaths. Others who were accused abandoned their homes, their livelihoods, their friends and relatives, to start again someplace else. Some people continued to live next to neighbors still suspicious of them.

That doesn’t even begin to touch on the grief of those who mourned their mother, father, husband, wife, daughter, son, brother, sister, cousin, aunt, uncle, grandparent, or friend who was ignobly hanged as a witch.

The reverberations of 1692 spread far and wide. If your ancestors lived in 17th century , no doubt in some way large or small they were affected by the witch hunt.