In the 1980s, staff and volunteers from the Historic Burying Grounds Initiative (HBGI)—a public/private program within the ’s Parks & Recreation department—walked the city’s graveyards and recorded all legible markers. Now you can search the HBGI database online to find ’s dead.

The database consists of:

You can search the HBGI database by surname or by cemetery. Instead of typing in the surname, you choose names from a drop-down list, which is helpful for finding variant spellings (and transcription errors). If, for example, you’re looking for Alden, make sure you scroll down to find the variant Allden. If you already know the location of the graves, you can choose to narrow your surname search by cemetery as well. The Alden/Allden burials are all listed at King’s Chapel Burying Ground on Tremont Street between School and Park streets.

The database has minimal information, and sometimes does not include a date of death. For example:

However, it may be enough for you to determine—through other sources—whether this grave is the one you’re looking for. Lucky for us, Robert J. Dunkle and Ann S. Lainhart compiled Inscriptions and Records of the Old Cemeteries of Boston

Finding the grave in person is a little trickier. The location includes “KC” for King’s Chapel, but once you get there, you won’t find neat rows or a map that corresponds to that location. That’s why you need Charles Chauncey Wells’ cemetery books with map inserts that correspond to the HGBI locations. For the Alden example, you’ll need Preachers, Patriots & Plain Folks

: 's burying ground guide to King's Chapel, Granary, Central. Then grab your map and head to the cemetery.

Choose your burial ground from the HBGI cemetery drop-down list and submit query. You’ll get an alphabetical list of everyone in that cemetery with legible gravestones. From the location description, G stands for Granary; C is one of the four sections that divides the burial ground on the Granary HBGI map. Use your Edit-->Find on This Page search button and type in G/C 312. You’ll find the next grave is for:

James Bearey has a full death date, so it will be easier to look him up in vital records and cemetery inscription books to see if he's related to Mary Ballard.

One word of warning. Some headstones have been moved, especially in the older cemeteries. Sometimes sextons decided to make the burying grounds look neater, more like the park-like cemeteries that became popular in the 19th century, and moved headstones irregardless of who was buried beneath or near them. Other stones toppled and were misplaced. So enlarge your search parameters or scan the entire cemetery list for familiar names.

The Historic Burying Grounds Initiative web site also includes a short history of each graveyard; an overview of the iconography of the gravestones (symbols on the graves); information on visiting a burying ground; and how you can help preserve these hallowed places.


Posted by Robin M No comments:

One foot in the (Granary) grave 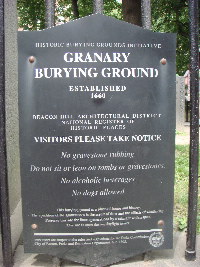 The Freedom Trail, that 2.5-mile red-brick path from Boston Common to Bunker Hill Monument in Charlestown, encompasses 16 historic sites, including Paul Revere’s House and the U.S.S. Constitution. Its popularity means that there’s a lot of foot traffic in hallowed grounds as the trail winds its way through the oldest cemeteries in Boston.


In January 2009, one tourist landed hip-deep in the stairwell of an underground crypt at Granary Burying Ground on Tremont Street. The 8-by-12-foot crypt remained intact, but broken slate and dirt covering the entryway gave way, causing the collapse. Although records are scarce, it’s believed to be the grave of Jonathan Armitage who died in 1738.
Founded in 1660, Granary Burying Ground attracts attention with its graves of revolutionaries Samuel Adams, Paul Revere, and John Hancock. The cemetery is part of the Historic Burying Grounds Initiative, operated by the City of Boston. Read more about the Historic Burying Grounds Initiative and how to use the HBGI online database.
This story was first reported in the Boston Globe.