Cotton Mather and the Six Degrees of Separation

“Conspicuous” on horseback, Cotton Mather (1663-1728) attended the hanging of fellow minister and Harvard graduate George Burroughs (1650-1692), found guilty at the Salem witch trials. Called the ringleader of witches, Burroughs’ parting speech followed by a perfect recitation of “The Lord’s Prayer” caused doubt to stir among the onlookers. Yet Mather, who firmly believed in the devil himself, dismissed Burroughs’ words.

And the executions continued.

Mather held a passionate dislike for Burroughs, despite their similar backgrounds. Perhaps he truly believed the former Salem Village minister conducted devil worship with scores of witches, murdered his two wives (as their ghosts told Ann Putnam Jr.), or turned Baptist. Whatever the cause, a Harvard historian concluded the Boston minister’s biography by claiming Mather was linked to Burroughs through their descendants, no doubt causing Mather to roll over in his grave.

“The name Mather among Cotton Mather’s descendants has long been extinct. His son Samuel Mather, (Harvard University 1723), had a daughter, who married the Reverend Josiah Crocker of Taunton, H.U. 1738, among whose descendants was Samuel Leonard Crocker of Taunton, a graduate of Brown University in 1822, who married a granddaughter of Isaiah Thomas, LL.D., the founder of the American Antiquarian Society at Worcester, whose maternal grandfather was George Burroughs, at whose execution Cotton Mather acted a Conspicuous part on horseback. Thus by the marriage of Crocker to a granddaughter of Thomas, the Cotton Mather family became united with the George Burroughs family.”
—Colonial Collegians 1642-1774, Harvard, pp. 797-798. (Online database at AmericanAncestors.org.)

So, let’s fill in the missing data to prove six degrees of separation between the two Puritan ministers.

Since we don’t know which Mather daughter married a Crocker, let’s return to the Colonial Collegians biographies.

Josiah Crocker (H.U. 1765) was born 1744 in Barnstable to Cornelius Crocker, tavernkeeper, and Lydia Jenkins. He married Deborah, daughter of Daniel Davis, and died in 1780. He lived in Barnstable and was a schoolmaster and clerk (p. 7319).

We’ve run through all the possible Josiah Crockers in Colonial Collegians, and even though Josiah and Joseph are not interchangeable names, there could be some confusion between generations. So, let’s continue.


Finding Parents for a Match

Now that we’ve solved the Mather-Crocker marriage, we have to skip a generation or two to find out who were the parents of Samuel Leonard Crocker, Brown University 1822. For that, we go to the Massachusetts vital records.

The Colonial Collegians biography had Cotton Mather’s granddaughter marrying Rev. Josiah Crocker (H.U. 1738), who was a generation older than her, instead of his son. Then it was the wrong son (Joseph, not Josiah). To clarify, Hannah (Mather) Crocker was the grand-aunt of Samuel Leonard Crocker who married Hannah Weld Thomas. That means Cotton Mather and George Burroughs were not related by blood through this line.

Fortunately, the Harvard Crocker biographies do not mention the false Mather/Burroughs connection. Nor does the Horace E. Mather’s Lineage of Rev. Richard Mather (1890). But you will see mention of it in other sources.


Hannah became well-known for her writing and good works. She believed in the equality of women, as shown in Observations on the Real Rights of Women (1818), and supported a women’s educational “lodge” based on Masonic principles. You can learn more about her by visiting the Hannah Mather Crocker Society online, which promotes “scholarship and public understanding concerning the life, writing, and legacies of Hannah Mather Crocker (1752-1829).”

In 1814—more than a decade before the Crocker-Thomas marriage—Hannah (Mather) Crocker donated 1,500 books from the Mather family to the American Antiquarian Society in Worcester, founded in 1812 by Isaiah Thomas LL.D. (1749-1831). Her descendants also donated manuscripts, portraits, and other ephemera to the society.

Remembering Salem: Symposium on the Lessons and Legacy of 1692 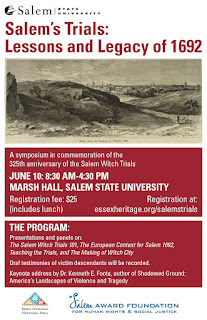 One of the reasons why the Salem witch trials of 1692 still resonate today is the quest to understand why it happened. Plenty of theories abound to answer that question. Yet we’re still trying to learn the lessons today.

On June 10, 2017, the 325th anniversary of the first witch trials hanging, people gathered for a special symposium, Salem’s Trials: Lessons and Legacies of 1692, sponsored by Salem State University’s history department, the Salem Award Foundation, and the Essex National Heritage Area. Fortunately, C-SPAN recorded four sessions. If you didn't attend this great symposium, here's your chance to learn from a stellar group of speakers.

A professor of history at SSU, Tad Baker is the author of A Storm of Witchcraft: The Salem Trials and the American Experience.

⏯ Margo Burns, The Capital Crime of Witchcraft: What the Sources Tell Us

Project manager for the Records of the Salem Witch-Hunt, Margo is a popular speaker, particularly in October.

A professor of geography at the University of Connecticut, Ken Foote is author of Shadowed Ground: America’s Landscapes of Violence and Tragedy.


Two other breakout sessions were not recorded: Teaching the Trials with Brad Austin, Amanda Prouty, and Jacqueline Robichaud; and The European Context for Salem 1692 by Donna Seger. (Amazingly enough, Donna packed a lot of information into one hour. I've got several pages of notes.)