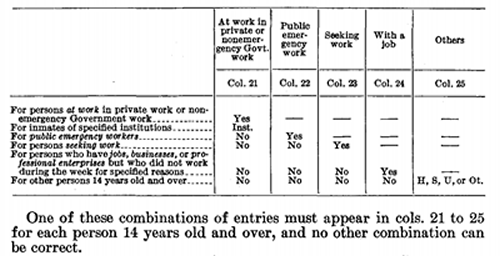 The 1940 federal census captures a critical moment between the Great Depression and the United States’ involvement in World War II. It’s no surprise the U.S. government asked 10 specific questions about employment for anyone 14 years of age and older in the 1940 census.

At the time, the federal and state governments sponsored numerous Emergency Work programs, such as the Works Progress Administration (WPA), which provided unemployed people with jobs to keep them off poor relief; the Civilian Conservation Corps (CCC), which gave men ages 18 to 25 jobs in conservation, typically with national and state parks; and the National Youth Administration (NYA), which provided high school and college students part-time jobs.

1.     In private or non-emergency federal, state, or local government work (“yes” to question 21). This included people in sales and service; farmers; unpaid family workers who contributed to the family income by working on the family farm or in the family business (other than housework or incidental chores); people who had five or more boarders; and people who worked at home for individual customers (dressmaker, laundress, etc.) or commercial employers (such as factory piecework).
2.     At work or assigned to public federal or local emergency work programs, such as WPA, CCC, and NYA (“yes” to question 22).
3.     Currently seeking work (“yes” to question 23).
4.     People who were absent from work during that week but have jobs, businesses, or enterprises (“yes” to question 24), whether on vacation, temporarily ill, temporarily laid off or on strike. This did not include seasonal workers, for example, the “professional football player and the housewife who works as a saleswoman during the Christmas season.”

Workers in private or non-emergency federal, state, or local government were asked how many hours they worked during the week of March 24-30, 1940 (question 26), while emergency program workers and job seekers were asked how many weeks they were unemployed up to March 30, 1940 (question 27). Weeks of working for public emergency work were to be counted for weeks of unemployment. Workers also were asked very specifically their occupation (question 28) and industry (question 29) and what class of worker (question 30):
Inmates (“Inst.” for question 21) of “prisons, reformatories, jails, penal farms or camps; institutions for the mentally diseased, mentally defective, or epileptic, and home for the aged, infirm, or needy” did not answer questions 22 through 34.

People not in the work force, those who answered “no” to questions 21 through 24, were asked in question 25 if they were engaged in housework (H); in school (S); unable to work for reasons of physical disability, old age, or illness (U); or, “for any other reason, were not at work, not seeking work, and without a job” (Ot).

Question 31 asked how many weeks a person was employed in 1939, which allowed the football player and Christmas saleswoman to be counted as employed. Question 32 asked the amount of wages or salary for Jan. 1, 1939 through Dec. 31, 1939. However, it did not include business profits, sales of crops, or fees for income. The limit for this column was “$5,000+.” Question 33 asked about income of $50 or more from sources other than wages or salary, including business profits, fees, rents, unemployment benefits, direct relief, interest, dividends, and income in kind paid as wages. However, it did not include lump sum inheritances or sales of land (“unless the person regularly earns his living by buying and selling such properties”). If the person operated a farm, check out the farm schedule (the number on the farm schedule is included in column 34).